Are you thinking about purchasing a popular ear cleaning kit?

Are you thinking about purchasing a popular ear cleaning kit?

Recently, there has been a surge in interest in ear wax removal.

The topic is all the rage online, with everything from ear candles and ear candling clinics to TikTok videos teaching how to remove ear wax. While this trend appears to be increasing online ear cleaning kit sales, the issue remains: Is it safe?

Everyone produces earwax to some extent. Cerumen is the medical word for this oily material produced naturally by the ears as part of their self-cleaning function. Earwax is formed by glands in the ear canal's skin, combined with dead skin flakes – the same type of skin flakes seen everywhere on the body.

Some people don't mind earwax, while others are bothered by it. Earwax has the potential to obstruct the ear canal. It can cause infection if left untreated.

It can potentially damage the ear canal bone in severe circumstances. And why is this the case? In a nutshell, it's genetics. Each person creates varied sorts and amounts because of their biology.

“Cotton swabs and other items placed into the ear canal without caution might cause harm to the lining. Bleeding, infection and pain may occur as a result. 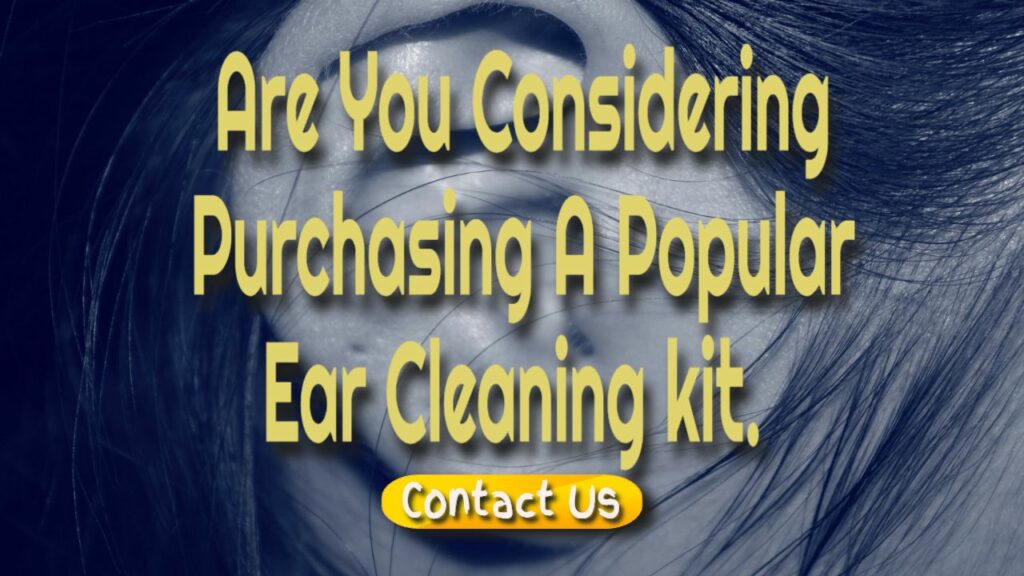 Think twice before purchasing these at-home treatment kits. Most of these are useless cleaning methods that cause more harm than good.

Any earwax removal method that involves blind manipulation of the ear canal should be avoided. Pipette solutions and the irrigation technique are relatively safe for home-usage.

Irrigation should be done with extreme caution since high pressure can seriously harm the eardrum. Furthermore, ear canal infections can occur due to increased moisture in the ear canal. Cleaning the ear canal with peroxide, isopropyl alcohol, or glycerin solutions is recommended.

An overview of the most popular earwax removal products available online. Earwax removal is touted as a benefit of several of these kits, reduce irritation, and massage the ear canal. Most, though, necessitate poking about in the ear canal with tweezers.

Here's a rundown of what to avoid and what to use with caution:

Avoid kits that include devices you enter into your ear, such as:

Picks made of stainless steel are pointed, spiral-shaped, or otherwise inserted into the ear.

Spiral picks are soft silicone, even though they are intended to be safer.

Smartphone cameras (endoscopes and otoscopes), picks, and lights are included in the kits. Even if you can see something with them, you must implant a device into your ear canal without being sufficiently trained to grasp what you're looking at.

Ear candles are not scientifically established, and they are more likely to cause harm, exacerbate the obstruction, and pose the risk of facial or ear burns.

The following kits should be used with extreme caution because they can also cause eardrum or ear canal problems:

Kits for removing earwax with soluble drops and irrigation.

Drops and a water-peroxide solution for rinsing are included in earwax removal packages.

If you have excessive earwax and are experiencing hearing loss or pain, it's time to contact a specialist. “We remove the extra earwax under close eye inspection. We utilise delicate equipment with magnification to remove earwax without hurting the skin of the ear canal or the eardrum, “The doctor elaborates.

Swimmer's ear is a frequent summertime ailment for anyone who enjoys spending time in the water.

Infection of the external ear canal (swimmers' ear) is caused by water left in the ear after swimming or indulging in other activities.

This offers a favourable environment for the organism's and even fungi's development. Minor traumas, such as scratching or ear canal inflammation, can cause otitis externa.

This includes excessively using cotton swabs, fingers, or other things such as earplugs or hearing aids.

These compounds can induce skin fissures in which germs can grow. Two chronic skin disorders that can induce otitis externa are eczema and psoriasis. A hairdryer, set to the very lowest setting and at least one foot away from your ears, can also be used to dry them.

Before swimming, make your ear drops for swimmers or use over-the-counter ear drops. I prefer to apply 7 to 8 drops of distilled white vinegar to the affected ear for 3 to 4 minutes, then gently insert a cotton ball into the ear canal opening to take out the liquid.

Any remaining moisture in the ears can be eliminated with vinegar, which will also help prevent the formation of bacteria and fungus.

Avoid putting things in your ear to avoid causing discomfort or perforation of the eardrum. This can also cause earwax to move further into the ear canal.

Ask your doctor if you should take extra measures before swimming if you have had an ear infection, ear tube, or ear surgery.

Mild cases of swimmer's ear typically resolve on their own, but if the infection persists, consult a doctor.

Bleeding, excessive fluid leakage, growing pain, fever, substantial hearing loss, and even a drooping face are all symptoms of an infection that is advancing.

Initially, you can treat the infection with over-the-counter swimmer's ear drops.

Untreated ear canal infections can spread to deep layers of skin and, in rare situations, the ear canal's bone.

People with diabetes, cancer or a weakened immune system are more likely to develop malignant otitis externa, also known as skull base osteomyelitis.

The infection can spread to the bones at the base of the skull, causing severe pain. In severe cases, the infection can impair the cranial nerves that control hearing, balance, facial muscle movement, swallowing, and speech.

To treat otitis externa, your doctor may prescribe antibiotics, antifungals, or steroid drops.

If antibiotics or steroids do not work, the ear canal must be cleaned or removed in the clinic, and extra antibiotics must be administered. Malignant otitis externa, on the other hand, necessitates a more stringent treatment regimen that includes antibiotics given intravenously as well as surgery to remove the diseased skull base bone are the most common treatments.

I handle many complicated disorders of the ear, vestibular organ, and skull base as an otolaryngologist with further training in diagnosing and treating diseases of the ear and associated tissues.

Brought To You By – Ear Wax Removal